Internapse was launched in October 2001 and has since changed several times in the last 15 years. I don't have the best screenshots from past years but the Internet Archive Wayback Machine does a pretty good job at keeping old sites available.

In 2001, the movie AntiTrust introduced me to coding and how a programmer can affect so many. One person was able to reach millions around the world through a good idea and some development. By combining "internet" and "synapse" to form a unique new name, Internapse was started in October 2001. For those wondering, Synapse was the system developed to connect every single device for video communication in the movie.

For the first few years, Internapse was a catch-all blog about my favorite interests including Marvel Comics, Dragon Ball Z, movies and video games. The site was originally hosted on Geocities, a free website building tool from Yahoo. The provided WYSIWYG tool was very limited and I wanted to know more about the behind the scenes code. Although very crude and limited to table layouts, I became introduced to HTML.

In early 2003, the site was starting to grow and needed a new home to continue. I moved the website to a friend's server that didn't come with the bandwidth restrictions of Geocities. I also bought the internapse.com domain name in 2003. A screenshot from then can be found below, although it's missing the logo and tagline images. 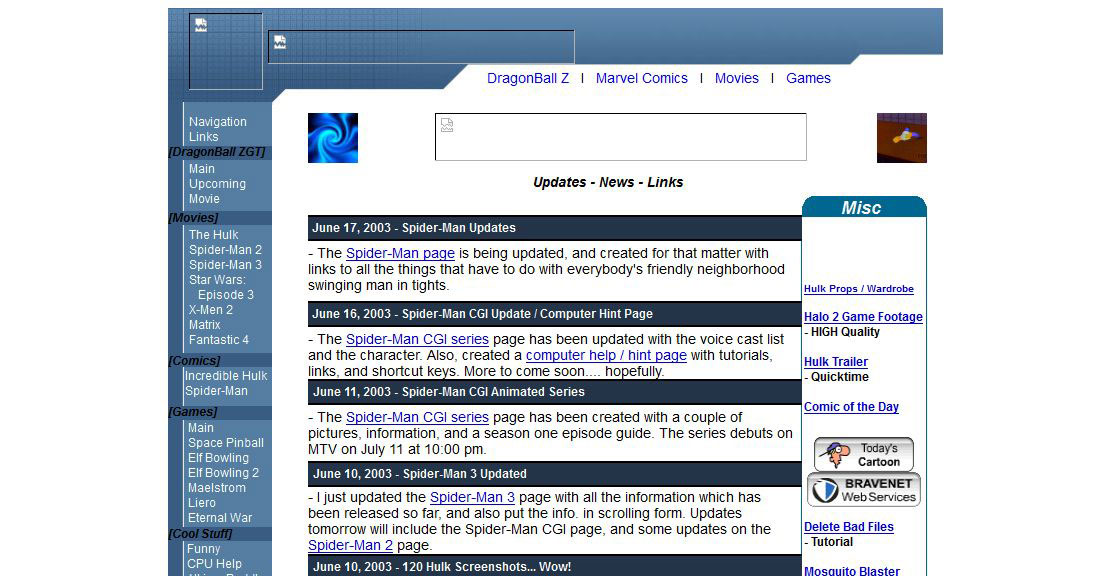 For a very brief time on March 10, 2005, Internapse gained popularity by posting the first trailer for Star Wars III. Ain't It Cool News was one of many movie websites to link over for the trailer. The website received over 50,000 views in just a few hours and I ended up removing the trailer at LucasFilms' request, but hey, you don't get an exclusive first look at Star Wars everyday.

The number of visitors may not seem like a lot compared to a major website today such as Twitter, but I remember checking the statistics every few minutes during computer class and watching the number climb higher. I was just about to graduate high school at this time and the excitement during that day made it clear - I wanted to pursue development as a college degree and career. 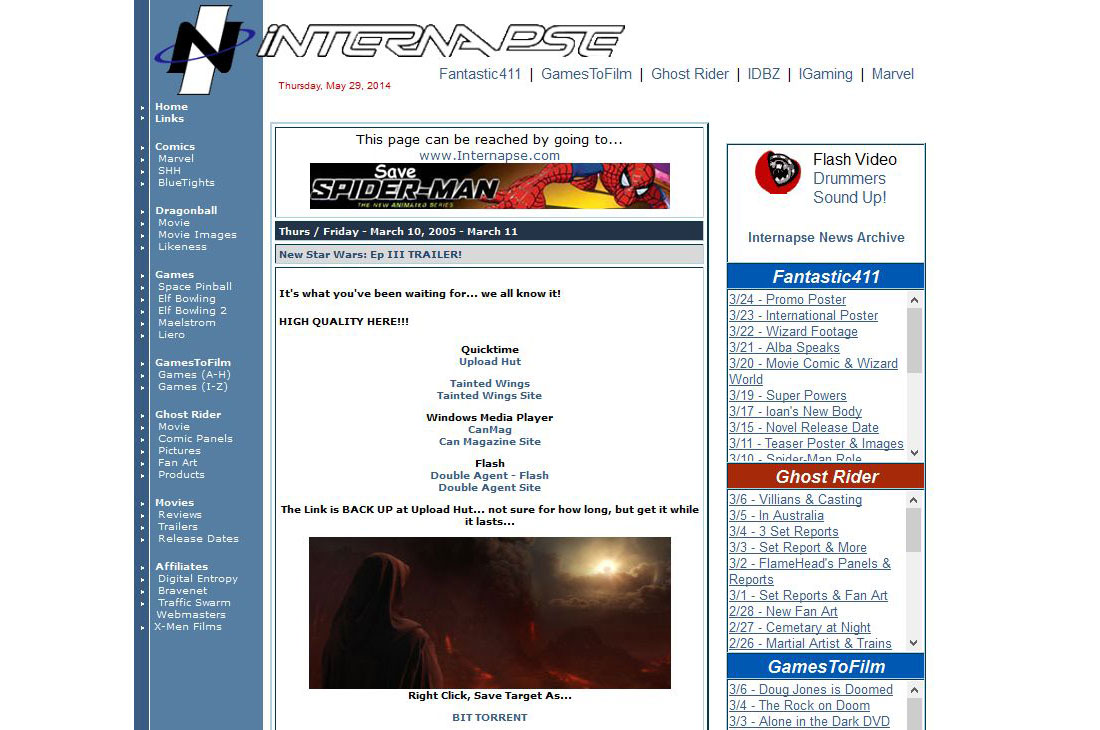 After the Star Wars III trailer took all my friend's bandwidth, Internapse was booted from the server and I moved to a webhosting company. I decided on LunarPages and stayed there from late 2005 until early 2012. I used the tagline "Makes you wonder" during this time which was a joke with my sister that often left people wondering its actual meaning. 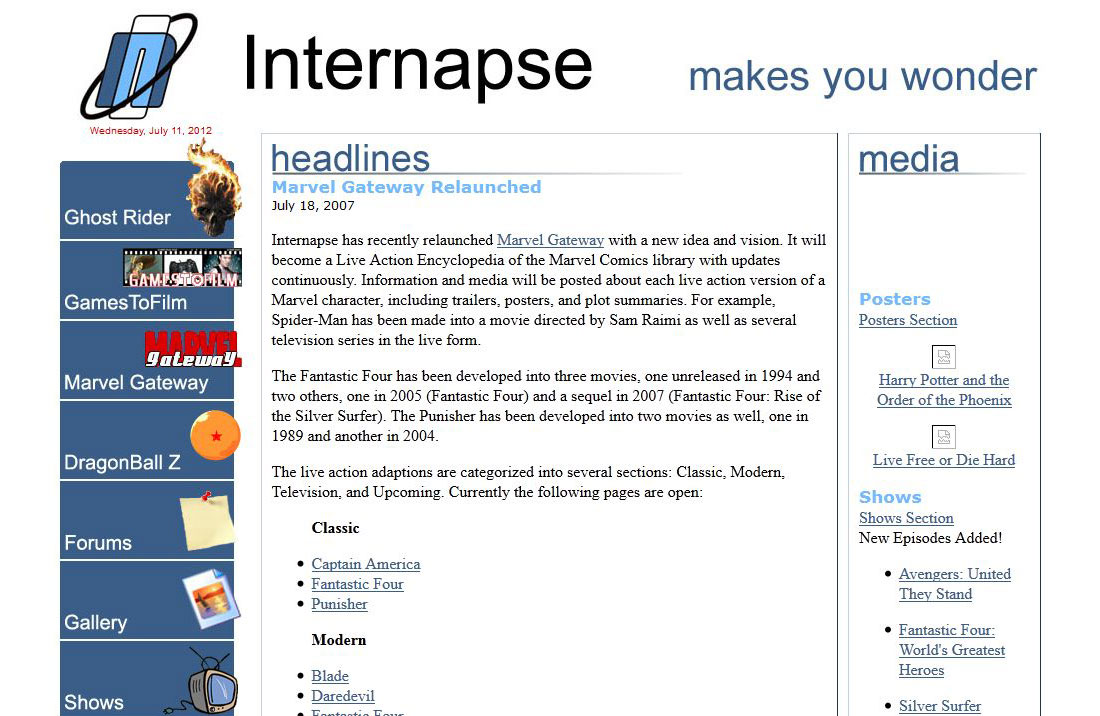 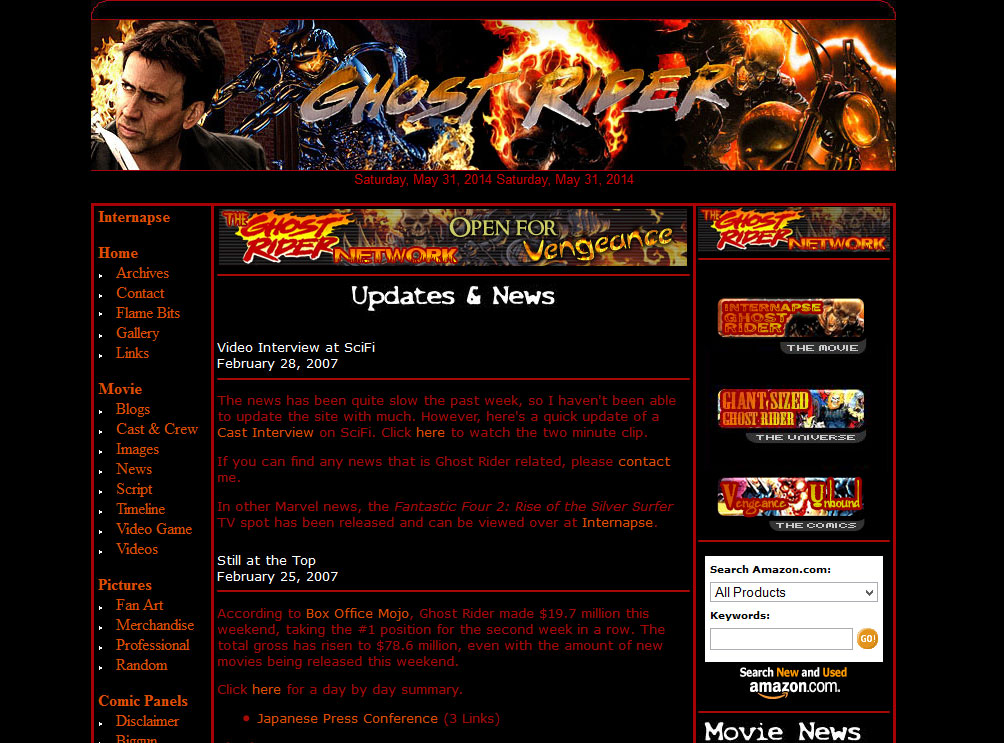 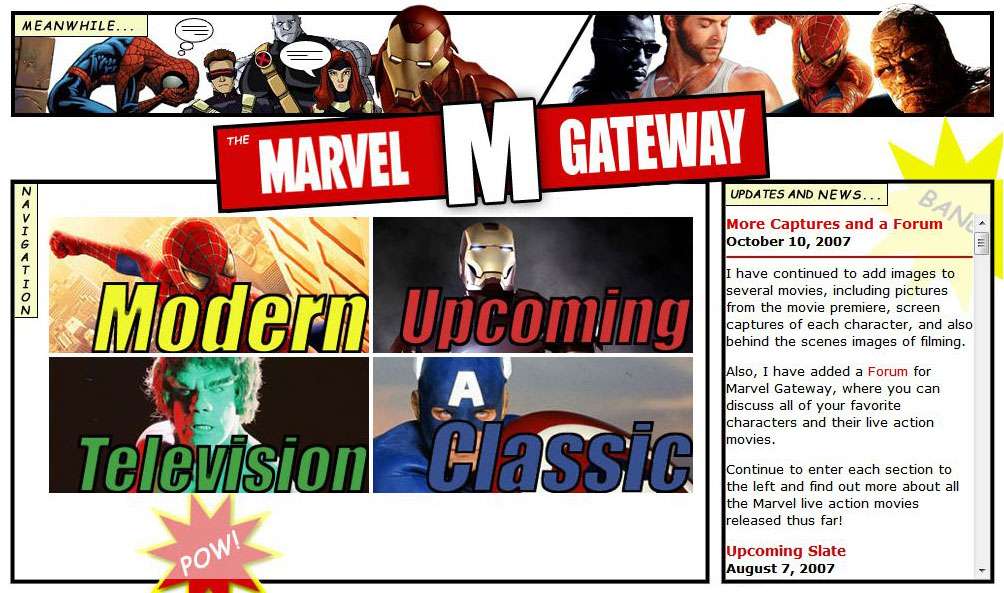 GamesToFilm is the only site to stick around, but was also shut down after a lack of updates. 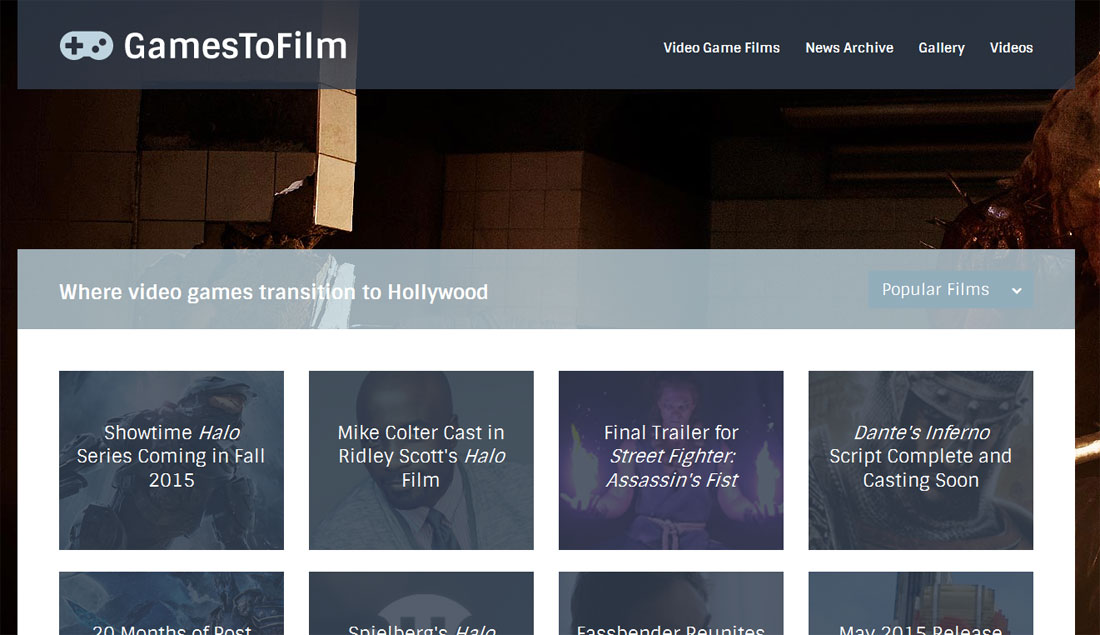 In February 2007, I was invited by director Mark Steven Johnson to the premiere of Ghost Rider in New York City. Meeting Nicolas Cage, Eva Mendes, Wes Bentley, Avi Arad and Johnson in person was an experience I could never imagine happening from just being a fan with a blog. Everyone was incredibly nice at Sony Pictures and made the whole event feel like a dream.

I've always been redesigning Internapse and that continued in 2009, 2010 and 2011. I also continued to post news about comic book movies, video game films, online games and movie trailers. 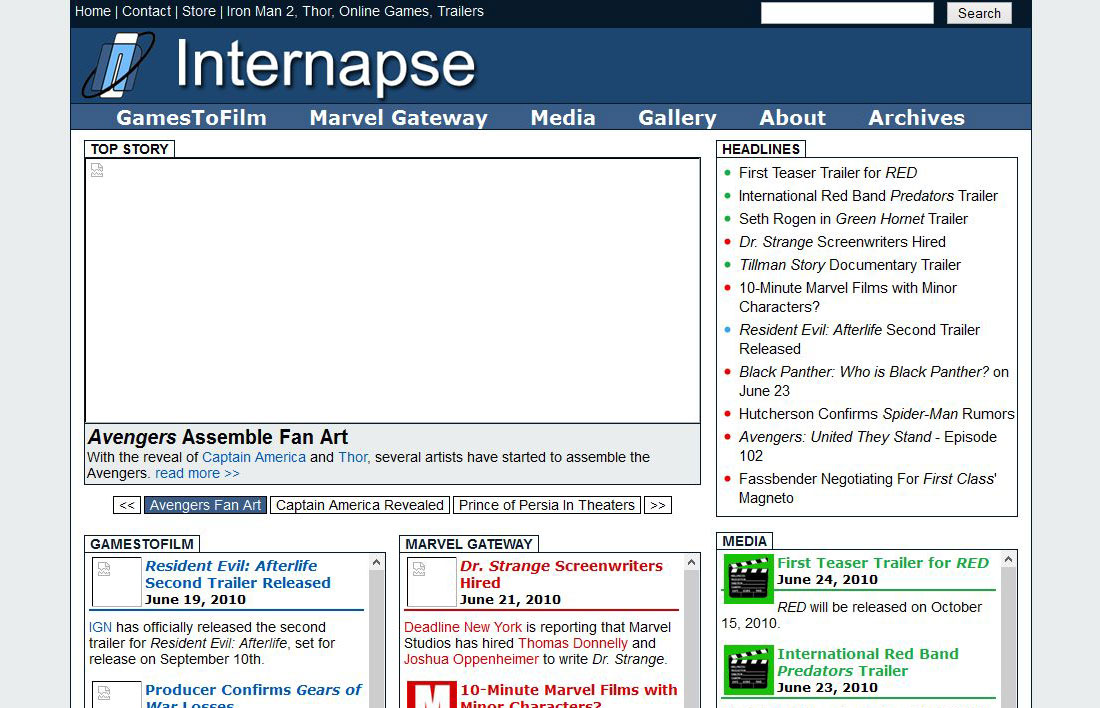 In 2012, I setup a server on MediaTemple and moved Internapse from LunarPages to this new server where it resides today. Finally, I removed the ring which had encircled the logo for almost a decade.

In 2013, I put up the following placeholder and went back to the drawing board with Internapse. 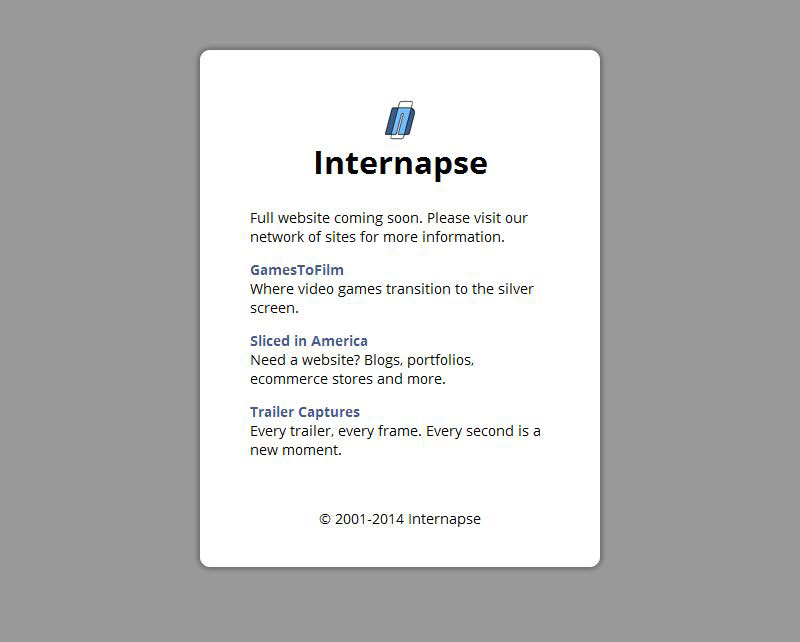 On May 16, 2014, the previous iteration of Internapse was launched, a news aggregator that delivered headlines from a simple keyword search. With nearly 200 topics including animals, sports, movies, celebrities and more, each page was updated hourly with the latest news headlines.

The latest version of Internapse was relaunched on May 22, 2016. Through a collection of websites, Internapse connects several communities by showing the latest videos from YouTube personalities.